Biophilic architectural design: a possible answer to an age-old dilemma 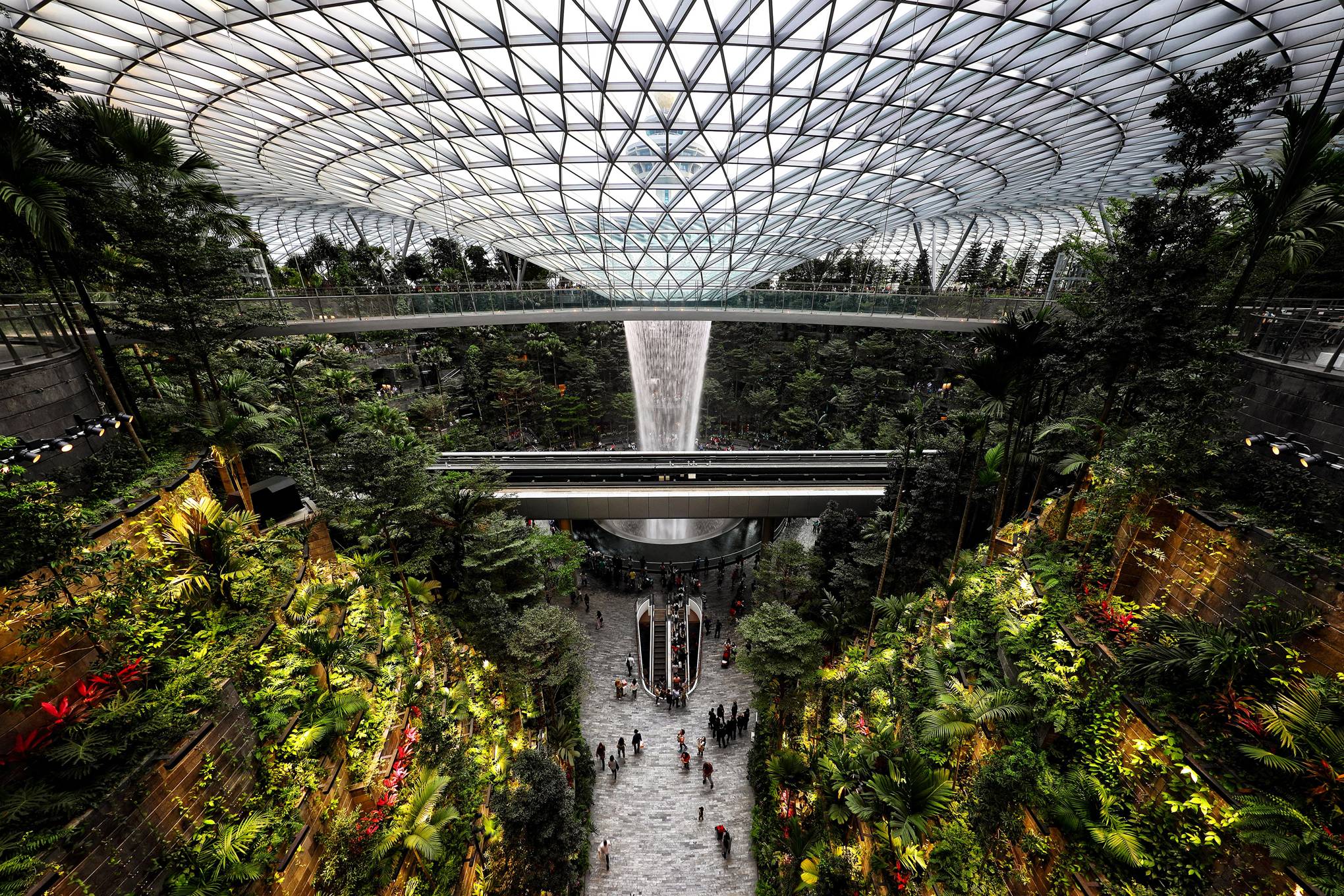 Even though one may feel at ease pacing through familiar streets, such as those in one’s hometown or a well-known settlement, a feeling of uneasiness and alienation retaliates sometimes, most notably when placed in foreign urban environments. The city turns estranged, blocks of concrete, and bricks stacked one upon the other become demeaning as the individual is engulfed by unnatural, menacing structures that contradict typical forms of life. These do not breathe, nor do they grow – they remain seemingly undefeated by mortality, as they sap human naturalness away.

The idea that cities are dehumanizing is as old as the Industrial Revolution itself and the rise of the machine. One need not look further than Ruskin’s writings, for instance, to identify this way of thinking, which has haunted Civilization ever since the Victorian Age and, perhaps, even earlier than that. It may seem counter-intuitive to feel about towns and cities in this way, but an explanation for this impression can be given through a relatively new hypothesis, proposed and popularized by Edward O. Wilson in the book Biophilia (1984), namely the biophilia hypothesis. Wilson defines it as “the urge to affiliate with other forms of life”.

If this be true, it is easy to clarify why one may feel tense or troubled among artificial and mechanical settings: it is programmed in our being to seek the opposite. Human perception of what lies around oneself further argues for this. Movement of mechanical objects is registered differently than that of living things. Whereby the first is perceived as neutral and even negative, the latter has positive effects. The continuous and monotone movement of a pendulum will behold one’s attention for only a few moments, mechanical sounds are ignored after a while and unnatural scents unaccounted for. Whereas, the haphazard movement of a bird, animal or creature will always capture one’s attention, bearing psychological benefits as well, such as the aggregation of various thought-processes.

Thus, here lies the problem: cities, constructions, machines, artificiality – all of these come across as dehumanizing and often times monotone. I believe that a possible solution to this dilemma lies within the hypothesis I briefly exposed above and in the remainder of this article, I will try to showcase why. Drawing inspiration from a paper published by Therapin Bright Green in 2014, which tackles the subject of biophilic design, the following paragraphs will present arguments in favour of architectural visions that strive for a return to nature, as much as this return is possible.

“14 Patterns of Biophilic Design” explores the need to affiliate with other forms of life from 14 different psychological and sensorial perspectives, ranging from visual inputs to inner feelings of safety and belonging. As this article cannot turn out to be pages long, I’ve decided to briefly summarise three points/segments the authors of the paper developed in order to utilize their logic as argument in favour of my ideas, as well as quoting relevant passages in order to strengthen my points. As such, these are the three main topics that shall be addressed: Presence of Water, Material Connection with Nature and Risk/Peril.

Water is the cradle of civilization. The Mesopotamian settlements were nursed by the Tigris-Euphrates river system. Egypt was born from the Nile and raised by it. People will gravitate towards wherever there is a stable source of water, for it signals life, prosperity and an opportunity to renounce the hunter-gatherer lifestyle and become stable. Bearing this in mind, it is no wonder that research showed the following:

Visual preference research indicates that a preferred view contains bodies of clean (i.e., unpolluted) water. Research has also shown that landscapes with water elicit a higher restorative response and generally have a greater preference among populations in comparison to landscapes without water. Supporting evidence has suggested that natural scenes without water and urban scenes with water elements follow with primarily equal benefits.

Research on response to activities conducted in green spaces has shown that the presence of water prompts greater improvements in both self-esteem and mood than activities conducted in green environments without the presence of water. Auditory access and perceived or potential tactile access to water also reportedly reduces stress.

Properly including water in the design of a building may thus have beneficial consequences. Its multi-sensorial capacities can help the individual feel calm, relaxed and somewhere secure. From a biophilic perspective, trying to implement these ideas may only result in great outcomes. A prime example is BIG’s Winter Bath in Copenhagen Harbour. The usage of wood (which we shall soon see, is another way of introducing biophilic principles in architecture) in conjunction with water gives the feeling of a natural occurrence, yet still, it is completely man-made. One does not feel estranged when amidst this structure.

Perhaps the biggest disconnect one perceives when comparing urban environments to natural landscapes is produced by the discrepancy between the materials used by man and the ones present in nature. Asphalt, glass, bricks, tiles – one would never find them in a forest, yet they are constant in human settlements. Studies have proven that this has a negative effect upon the individual.

One such study demonstrated that a difference in the wood ratio on the walls of an interior space led to different physiological responses. The researchers observed that a room with a moderate ratio of wood (i.e., 45% coverage), with a more subjective “comfortable” feeling, exhibited significant decreases in diastolic blood pressure and significant increases in pulse rate, whereas a decrease in brain activity was observed in large ratios (i.e., 90% coverage), which could be either highly restorative in a spa or doctor’s office, or counterproductive if in a space where high cognitive functionality is expected.

The data shows that if we try to incorporate naturally occurring materials in our constructions, levels of stress and anxiety reduce. This is another argument for a biophilic approach to architectural design. The example of the BIG Winter Bath mentioned above can be again invoked here. But this time, I believe that everyone reading these sentences may relate to this idea if I were to bring up holiday cottages up in the mountains made out of wood and surrounded by nature. All of those who had a stay in one will agree that the experience was refreshing and invigorating. Part of it was due to the ‘materials’ that were around.

Humans have always been captivated by a subtle sense of the unknown – danger and adventure may lie ahead. The bottom of the ocean is not explored, we know less about it than we know about the surface of Mars and we are sure that it is perilous to the extreme – yet our innate sense of curiosity drives us towards exploring it. However, this isn’t really a matter of fear, but risk/peril. I believe that quoting the already heavily referred to paper could shed more light upon this distinction:

Risk can be generated by a learned or biophobic response triggered by a near and present danger. This danger, however, is inert and unable to cause harm due to a trusted element of safety. The defining difference between Risk/Peril and fear is the level of perceived threat and perceived control.

Having an awareness of a controllable risk can support positive experiences that result in strong dopamine or pleasure responses. These experiences play a role in developing risk assessment during childhood. In adults, short doses of dopamine support motivation, memory, problem-solving, and fight-or-flight responses; whereas, long-term exposure to intense Risk/Peril conditions may lead to over-production of dopamine, which is implicated in depression and mood disorders.

A potentially extreme example is the Zhangjiajie Glass Bridge in China. With a total length of 430m, it is a heavily frequented touristic attraction, even though common sense would not want to cross something allegedly frail, as most individuals associate glass with fragility. The adrenaline boost the body receives pushes one forward both mentally and physically. It is a way to face fear and, why not, overcome phobias. Even though it may initially raise anxiety levels, the dopamine associated with short exposure to risk/peril takes over and induces a feeling of lightheadedness. Yet another positive outcome of biophilic thought.

A possible answer to an age-old dilemma.

Theories suggest that contemporary landscape preferences are influenced by human evolution, reflecting the interiorized natural context varieties which provided the best chances for survival. As such, one may point towards:

Taking these theories into account and the arguments I have provided above in favour of biophilic approaches to design, it may seem that an answer might surface, an answer for the problem I have introduced in the first section of this article. Cities are dehumanizing and they often induce feelings of stress and uneasiness. One of the most evident solutions to counteract this phenomenon is a return to nature in as many ways as future architects might envision.

A biophilic mindset may help humanity build itself habitats which no longer take away that which is inherently human. Sociology and psychology have repeatedly shown that environments influence the development of individuals and, as such, we need to ask ourselves: do we want to breed cold and alienated people who long for something they no longer possess, clouded by a feeling of melancholia, or do we want to break the circle of lifelessness which some urban environments so eagerly hold on to? The answer to this question dictates our future actions.