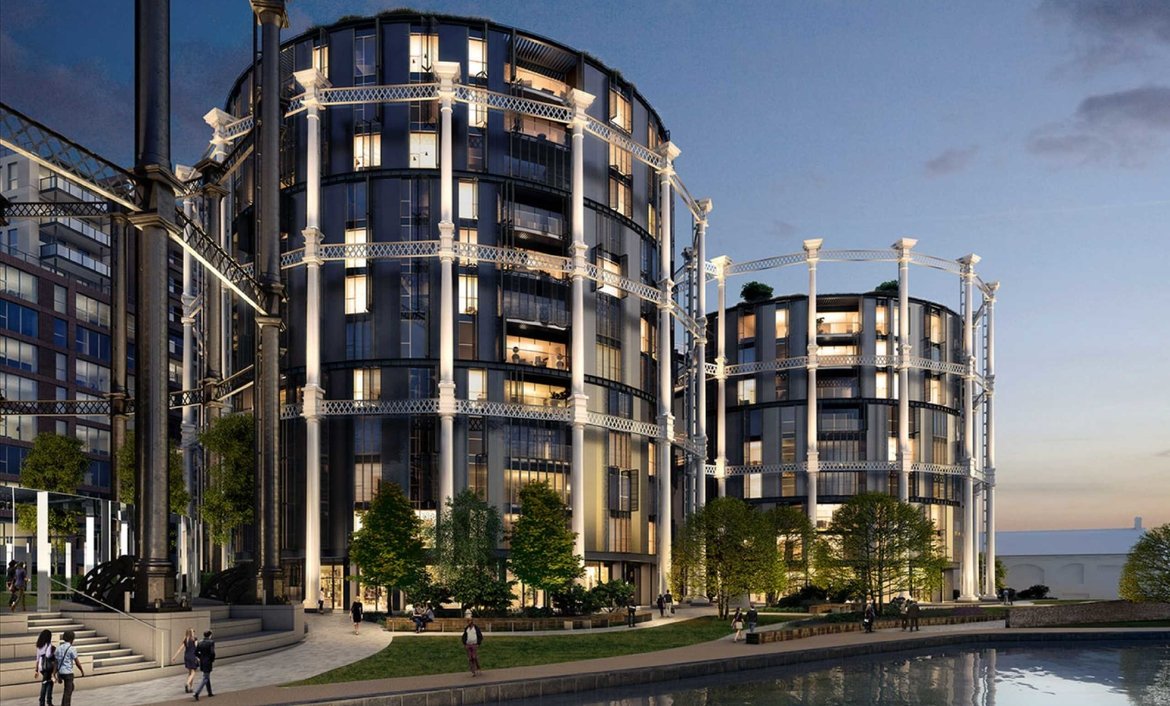 The Gasholder Apartments in King’s Cross (14-15 Stable Street, N1C 4AB) represent the most recent and enlightening example of this modernity. Once an industrial wasteland, where most would avoid, the north-central area of King’s Cross has now become the go-to place to meet clients, have a drink with friends and dine. In fact, it is no coincidence that Google has chosen to position its new European HQ there.

Historical Background
These Victorian gasholders were originally built in 1860-67 for the storage of town gas for Pancras Gasworks, the largest gasworks in London. After that, they were enlarged with new interconnected guide frames and telescopic lifts and preserved as Fine Art buildings. Gasholders Nos. 10, 11 and 12 represented the only triplet of gasholders in the world and were active until the late 20th Century when the gasworks was decommissioned.

The entrance of the complex presents a luxurious lobby featuring state of the art lightning artwork as well as a dedicated delivery room for dry-cleaning and food deliveries.

The apartments, ranging in floor plans of 449 to 3,050 square feet, have curved walls reflected by mirrors to visually create more space and appear to continue round. Living spaces are positioned at the wide end, while bathrooms, featuring brass handles taps, are at the tip of the ‘cake slices’. The Gasholders feature a rich list of amenities including a gym, spa and cinema, bookable communal spaces, a courtyard with reflective pool and garden rooftops decorated by Dan Pearson, winner of the Chelsea Flower Show. The roof gardens and upper floors offer a panoramic view over Canary Wharf, St Paul’s, The Shard and the London Eye.

This project is the epitome of what King’s Cross is all about; industrial heritage and cutting-edge contemporary design blending to create an urban environment with character.