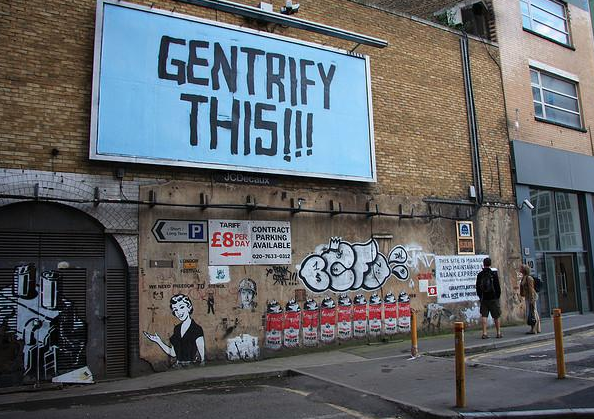 Gentrification is the renovation process of deteriorated urban neighbourhoods utilizing the influx of more affluent residents. Gentrification can quite drastically enhance the quality and livelihood of an area, but like many things, there are negative outcomes of this; the most prominent being the potential forced relocation of established and existing residents and businesses. This causes them to move from said area, usually due to financial factors such as rental increase. On the topic of gentrification, Neal Hudson of Savills division said:

Hudson’s claims are completely accurate. I grew up in Harrow, North West London – an area that hasn’t changed much at all since my youth. However, just around the corner, you have Wembley, which has changed drastically since my childhood. In 2002, Brent Council and Quintain formed a partnership to go forth with the regeneration of Wembley, in which over £1.5bn has been invested. The regeneration of Wembley has so far produced Wembley Stadium, a refurbished Wembley Arena, the Civic Centre alongside London Designer Outlet, Wembley Park Boulevard, a sizeable chunk of hotels and student accommodation complexes, along with hundreds of new homes.

Despite the areas meritable accumulation over the past sixteen years, such a huge regeneration project has been met with much concern. Firstly, the effect it has on surrounding areas. Now, to Londoners this may come as no surprise, being in one of the most expensive cities in the world, but most properties in Wembley fall out of the “affordable” range. Quintain has invested billions into Wembley Park, which may have been without the careful consideration of drawing evaluation from Brent’s residents over the years. The result has led to quite dramatic socioeconomic disparities.

Another area of London known well for its gentrified transformation is Hackney. Hackney has been widely drawing attention for quite some time, as the hub of East London’s ‘hipster’ culture where many graduates flock to try their luck in the hustle and bustle of the capital. Hackney has most certainly come a long way from how it used to be – the London Olympics in 2012 played a huge part in this. To give a short narrative of how this event inflicted repercussions on urban development, the coordination of the Olympics in East London ultimately shifted focus to a physical regeneration that would benefit a global event.

The central ambition in the transformation of post-industrial East London was to create an economically competitive area that would be visually compatible with the image of a redeveloped landscape. Businesses that were regarded “either of low economic value for London and or not suited to integration within mixed-use development” were relocated, thus leading to a dispersal of the economic factions already active in the area. Other pre-Olympic occupants who did not have the capital to afford stable housing, particularly among them artists, have been out-priced as a consequence of the rise of land value. The increased investments in the real estate of this area are largely due to its proximity to the Olympic Park. However, the regeneration process also stimulates housing development projects and retail amenities that cater to the middle class. Thus occurs a shift from a ‘working’ and goods-producing Hackney Wick, to a predominantly middle-class residential area built around a focus on consumer practices.

One thought on “The Case of Gentrification”